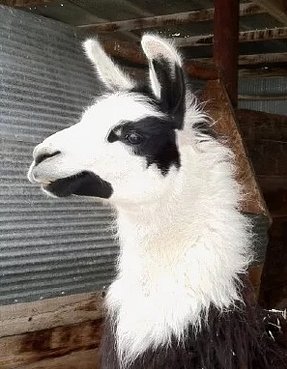 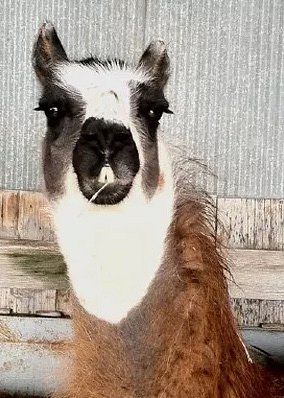 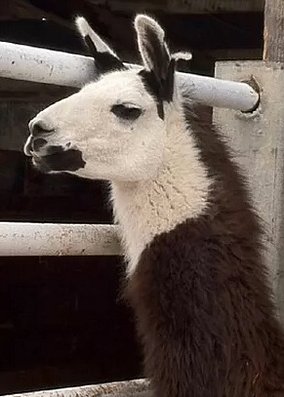 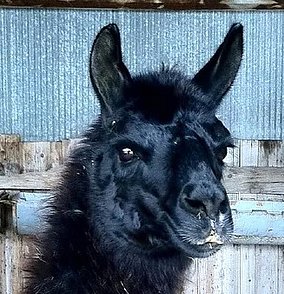 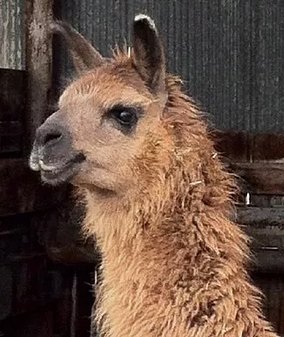 My llama assistant Laurel Snider and I met up with three uniformed deputies, who escorted us to the llamas. It was a difficult spot, flanked on one side by a major state highway and on the other by a dead-end county road. We had to park my truck and 30-foot trailer on the county road, as there was no open driveway into the home or the barns and field beyond. The five of us walked several hundred yards through deep snow, weaving through a flock of 100 or more domestic geese and an entire barnyard of trash and junk (lots of broken glass, boards with nails, rusting and sharp chunks of iron, broken buckets, etc.) to get to the llamas. As I'd been told, the female (who only has half ears due to frostbite as a cria) and her nearly grown son were being kept in a tiny corral with attached shed - both of which were also full of rusting iron, broken glass, boards with nails sticking up. The three other intact males were in what looked like a 5-acre open field with iffy barbed wire fencing and no shelter.

Feed was down to a bale of hay, and there was no water anywhere, although the owner had assured Deputy Nichols that he'd been carrying unheated buckets of water to them from time to time. In spite of that significant lack of care, Laurel and I were pleased to discover that the llamas were well fed and in fact overweight. It's a rare find in a true rescue situation, and the law enforcement team led by Deputy Nichols were to thank for it. Time and again, across the country, law enforcement agencies fail to intervene in neglect or cruelty cases until animals have begun to die. In this case, the deputy in charge watched over the herd for months, working to create a trusting relationship with an ignorant and incapable but not cruel owner, to achieve voluntary surrender before absolute disaster occurred. Once we hiked our way to the llamas, we could see that their toenails were long and curled but not dangerously so. None of the llamas had ever been shorn.

Where the extreme neglect of these domesticated animals entirely dependent on human care made itself most clear, was that all the llamas were terrified of humans. They immediately began charging the fences when even just a couple of us entered the corral. Two of the intact males out in the field fought violently with each other when they weren't trying to flee from us. One of them sported an ear split in half, and soon after our arrival, a fair amount of blood was flowing from his mouth and nose. We'd been told that the llamas hadn't been handled much, but watching them react with panic at the mere sight of us in their space did not bode well for what was about to unfold in order for us to get them rounded up and trailered. There was nothing to be done except to start the process. The three deputies escorting us were literal lifesavers. They did whatever I asked, serving as guides, protectors and ultimately handlers of petrified, untrained animals they knew nothing about.

We began with the mother and son pair. The female was frightened and threatened to scream whenever she was touched, but by going very slowly and steadily I was able to halter her. It was with great relief that we discovered she led beautifully. That was the end of the halter trained llamas. The youngest male, son of the female, was more curious than afraid until catching actually began. I was able to get a halter on him, but the moment I tried to fasten it, he exploded and began throwing himself against the barn walls. We got those two loaded onto the trailer (after slogging our way back out to the road), by leading mom, eventually lifting her into the trailer, then gently guiding her son in after her. Conveniently, we loaded one of the intact males in at the same time as the son, because the three males went crazy when we left them and one of them jumped out of the field and followed us (after taking a freedom romp with the youngster). It took a lot of soothing, care and time, but I did manage to get halters on the other two intact males (the ones trying to constantly kill each other) but neither were halter trained, much less trained to lead. We ended up moving them from the barns to the trailer out on the road by using two lead ropes on each llama (Laurel's brilliant idea), with a handler on each side, far enough away to be safe and give the llama breathing room but close enough to guide him. A third person walked behind each llama, gently guiding him forward. It worked quite well, all bucking, rearing and dropping to the ground aside. One of the llamas went most of the way on his knees. At the trailer, we loaded using the handlers up front, a light rope under the rump, and someone lifting front legs in. The trailer's movable dividers proved essential in being able to keep mom and son together and separate the two fighting males.

It was then a four hour trip up to Laramie for boarding while we get them gelded, fighting fangs and feet cared for, and start assessing what it's going to take to find these llamas good homes. The female will also need to be checked for pregnancy since she's been living with her ungelded son since birth two and a half years ago. We won't really know what the potential for this group is until the gelding has been done and the basic fear of humans is taken away. I have a hunch that with handling and without testosterone, the males will be calm animals with companion animal potential. But it will be a very big project to get them there. The female can go to a home with someone who has at least some experience handling frightened llamas and has a lot of love to give. It was dark by the time Laurel and I managed to navigate the five llamas into individual shelters with large runs. Within minutes, they settled down to hay and limitless water coming from automatic waterers. For the first time that day, calm settled over the animals and us. For the first time in years, these animals have security, safety and contentment in their future.

Navigating the Hazards of Llama Rescue
by Gayle Woodsum

There's nothing simple about llama rescue. From the demand of skill and time to the financial burden, the list of challenges to be surmounted can often seem endless. Not to mention the emotional drain. The one I never understand is the politically based challenge that proposes llamas shouldn't be rescued. My love for animals, my years of enjoying camelid companionship simply precludes the notion that I should turn my back on the usually inconvenient, often demanding process of rescuing a llama or alpaca from a bad situation. My DNA just isn't wired that way.

So, when Deputy Gary Nichols of the Moffat County Sheriff's Office in Craig, Colorado contacted Southwest Llama Rescue in regard to five llamas living in a bad situation that were poised to be legally seized if they weren't surrendered voluntarily, and when every effort to find someone to pick them up and provide foster care failed, it became clear that the job was on me - I was just two hours away.