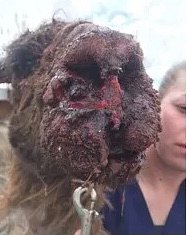 Southwest Llama Rescue does everything we can to help any llama in need. Usually our rescues are because the owner has fallen on hard times and can no longer care for the llamas. Sometimes the rescue is more urgent. Such was the case of the llama who was dubbed Lester by Stuart Dyson of KOB Eyewitness News. Our thanks to the TV station for publicizing Lester's plight and their continuing assistance in sending donors to us.

Sunday night two llamas wandered onto the property of an Estancia man, one brown and one white. Monday morning the brown one showed up again but without his companion. Overnight he had been attacked and was now all ragged and bloody, probably the work of dogs or coyotes. He had numerous puncture wounds, scratches and his nose had been partly torn off.

Southwest Llama Rescue was contacted and we agreed to pick up the tab for a large animal veterinarian in Edgewood to treat the llama. SWLR director of the board Lynda Liptak stepped up to coordinate Lester's, now renamed Larry, move to the vet clinic and on to a foster home as well as a search to find the white llama. Efforts to locate her are ongoing. We can only hope she wasn't killed in the attack that hurt Larry.

"We did give it an anti-inflammatory for pain," said Dr. Stacie Boswell. "We gave it an antibiotic to help those wounds heal and we're just going to wait and see what happens. If this llama can drink then he will be okay and if he can't drink, then we may take the next step and hospitalize him."

Dr. Boswell said there is no microchip on Larry, and sheriff's deputies say nobody has reported a missing llama - or two. Lynda managed to find Larry's owner and the llamas have been surrendered to SWLR. Larry is now recovering at his foster home but will need to be adopted out. If his mate is found, she will also need to be adopted out. Larry is gentle, smart, and has very nice soft fiber. He will make a great pet and is easy to catch and with a little work would learn to walk on a lead very easily.