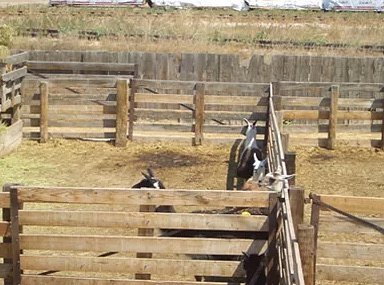 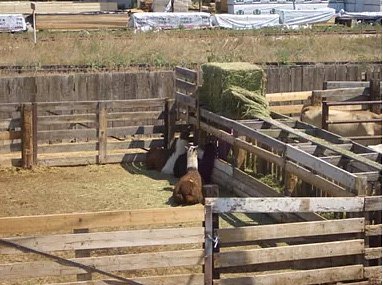 In early July 2006, SWLR was notified that a number of llamas would be sold at an area auction house. Because slaughter house and exotic meats buyers frequent these locations, SWLR members and friends jumped in to raise donations and rescue these llamas. Our representatives attended the auction, purchased the llamas that were not going for high dollar, and brought them back to our respective homes.

We didn't know what to expect when we went to the livestock auction in Ft. Collins, CO. Just a few days before, Lynley Nichol of Colorado Llama Rescue contacted SWLR and told us that a number of llamas would be sold at auction. Since llamas typically go for $20-$60 at this place, there was a very real fear that slaughterhouse buyers would get the herd.

SWLR quickly put together a fund drive, which brought in enough money to send a buyer. L'illette and Kris, along with some non-SWLR friends, brought home about 18 llamas altogether.

The facility itself was clean and well maintained, but it was a terribly hot day and there was no shade for even the babies. These llamas had never been off the farm, had no training, and were clearly confused and afraid.

One cria had apparently been born only a day or so before traveling. He was premature, with dropped pasterns and floppy ears. (Little Stormy is now a healthy weanling [Dec 2007]) Another baby was separated from its mother and sold with an unrelated female. Unfortunately, that mom and baby never were reunited.

After a second auction rescue in late 2007, we now have a contact at one of the slaughter-houses that frequents the auction house. Hopefully, we'll be able to find out about llamas scheduled for auction and, maybe, get them before they go up for bidding. Or, at the very least, be there to prevent them from ending up as dog food... really!